I’m Sorry That My Poem’s Late 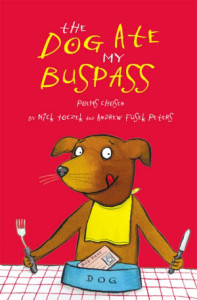 I’m sorry that my poem’s late;
I didn’t quite anticipate
that when I went to write it down
I couldn’t find a single noun.

Then, even worse than I had feared,
I found my verbs had disappeared.
A writing nightmare coming true—
my adjectives were missing too.

I scoured the house for metaphors
and similes behind the doors.
By now, I’m sure that you have guessed
that they were missing like the rest.

And it was just a waste of time
to look for rhythms or a rhyme.
I couldn’t even find a feeling,
though I searched from floor to ceiling.

I didn’t try to understand,
but gripped my pencil in my hand,
then set aside my fear and rage
and pulled that pencil down the page.

To my surprise, the words flew out—
began to dance and scream and shout.
Though I was mad, I had to smile–
those silly words were hiding in my pencil all the while.

Copyright © 2004 Ted Scheu. From the book The Dog Ate My Bus Pass. Macmillan Children’s Books, UK. Reprinted by permission of the author.