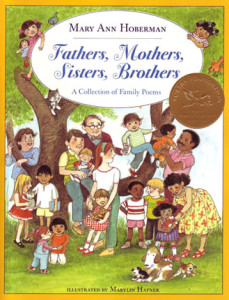 David asks for his dessert
Peggy wants to press her skirt
She has dance class and she’s late
David says he cannot wait
Mike is giving him a ride
He’ll just go and wait outside
Father tells him he will not
David mutters thanks a lot
Ann says she expects a call
Benjamin won’t eat at all
Mother starts to serve the pie
Benjamin begins to cry
Mother asks him what is wrong
Father says the tea’s too strong
Ann gets up to get the phone
Benjamin begins to moan
Peggy says her tights are torn
David says he hears a horn
Father says to finish first
David says that he will burst
Peggy says it isn’t fair
Ann has on her other pair
Now she will be late for class
Benjamin upsets his glass
David’s taking tiny bites
Ann is taking off the tights
David says the crust is tough
Mother says she’s had enough
Father says it’s not too bad
Mother says she’s going mad
David wiggles like a mouse
That is dinner at our house. 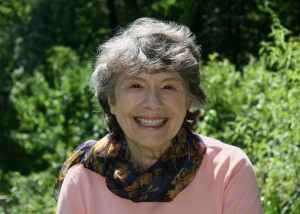 Mary Ann Hoberman, a former Children’s Poet Laureate, is the critically acclaimed author of over forty books for children, including A House is a House for Me, winner of a National Book Award. One hundred of her favorite poems are collected in The Llama Who Had No Pajama. She also received the 2003 Award for Excellence in Poetry for Children, given by the National Council of Teachers of English.