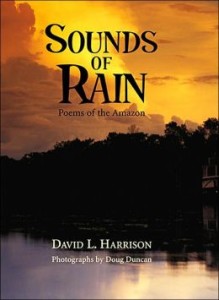 Upstream the jungle hovers,
leans in from either side,
hides secrets behind vines,
three huts perch
along a strip of clay.

Men stand still as trunks,
size us up as hunters do.

Mothers pause, smile a little,
a courtesy to strangers on the river.

Children laughing with their eyes
run the bank naked or not
good will grinning across the water.

They wave and we wave back
until we turn the bend,
carrying away the memory.

Copyright © 2006 David L. Harrison. From the book Sounds of Rain: Poems of the Amazon. Wordsong. Reprinted by permission of the author.

We left the Amazon and kept pushing further upstream on smaller tributaries deeper into the Peruvian rain forest. At night occasional lights from huts along the stream flickered like fireflies through the trees. By day we passed silent native people as curious about us as we were of them.

If I were in school and teacher said to write about what I did this summer, Sounds of Rain would be what I did in the summer of 2003. We took a trip and I brought back 90 pages of notes and hundreds of pictures. You don’t have to go to Peru. A trip to your own back yard is worth writing about!