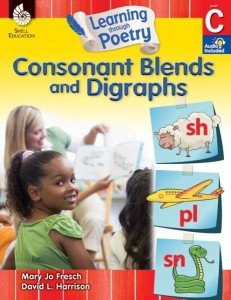 Anyway she saw a sip,
I meant to shay a shailing ship,
Wait – I meant a sailing sip,
At noon one stormy night.

On that ship she shaw shome sheep,
The seep she saw were fast asleep,
Shirley shaw some sheep asleep
Snoozing in the sun.

The captain’s name was Sailor Sam,
When Shailor Sham shaw Shirley Shark,
He shouted, “Save the sleeping seep!
She’ll swallow every one!”

Sho Shailor Sham shaved the sheep
Schmoozing in the shun that night
And Shirley Shand Shark shwam away
And shank in the shea out of shight.

Copyright © 2013 David L. Harrison. From the book Learning through Poetry: Consonant Blends and Digraphs. Shell Educational Publishing. Reprinted by permission of the author.

In a series of five books about phonemic and phonological awareness, my job as the poet was to take 96 basic sounds in the English language and write a poem about each one. Being inspired by a single sound is a daunting task, but it’s also a fun one. This poem, based on the digraph sh, turned out to be something of a challenge to read aloud quickly.

To do this in the classroom, select a sound – long a, short u, the consonant – and create a list of words featuring similar sounds. Share the list on the board and look for matches between subjects and actions: “On that ship she saw some sheep.” “Sailor Sam saw Shirley Shark.” While you’re looking, keep an eye out for rhymes. Okay, so you have to use your imagination too. I promise it’s fun and students really get into the game.

Click here to read more about Playing With Phonemes.