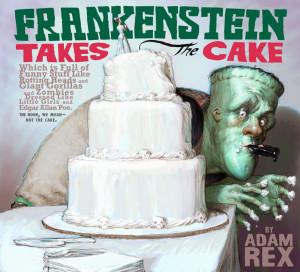 No ghosts are seen on Halloween,
except for kids in sheets.
No zombies ring for anything
apart from tricks or treats.
Though people say today’s the day
when bogeymen come out to play,
November 1st is when the worst
of monsters hit the streets.

And in disguise the dead arise
to sell us magazines.
In ties and slacks they hand out tracts
as fine, upstanding teens.
Just like the kids the night before
these horrors go from door to door
with vacuums, mops, or other props,
and boring sales routines.

It might feel mean on Folloween
to just ignore your door.
“A Girl Scout troop is on my stoop,”
you’ll mutter. “Nothing more.”
You want a snack so bad it hurts,
but trust me–those are ghouls in skirts.
With that in mind you’ll find
you’re not so hungry anymore.

When I wrote this I lived in Philadelphia, and people rang my doorbell a lot and got me out of bed on Saturday mornings to tell me things I was too sleepy to listen to.  This poem was my feeble way of getting back at them.