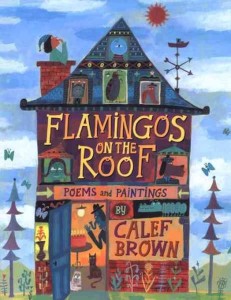 Copyright © 2006 Calef Brown. From Flamingos on the Roof. Houghton Mifflin Books for Children. Reprinted by permission of the author. 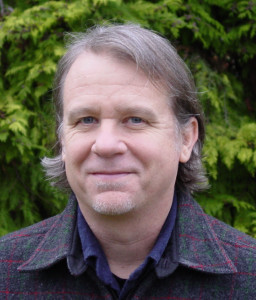 Calef Brown is a well-respected Enthusiologist
with a thriving private practice
in a cactus and flower garden, which is very convenient because his diet consists mainly of greenery.
He likes to chew the scenery,
and will often eat a cedar tree at teatime,
followed by key lime pie.
By the by, Mr. Brown has won acclaim
and awards for the non-ordinariousness
of his poetry and artwork.

Calef has penned and illustrated many celebrated books including Polkabats and Octopus Slacks, Dutch Sneakers and Fleakeepers, Tippintown, Hallowilloween, Boy Wonders, and Flamingos on the Roof, which won the Myra Cohn Livingston Award for Poetry and perched itself atop the New York Times bestseller list. He lives with his family in beautiful Vancouver, Canada.