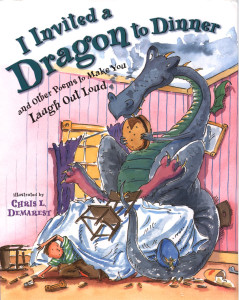 You hear it comin’ down the tracks,
but you can’t stop the mouth of Max.
Don’t stand in its way, you’ll be run over flat;
it’s comin’ through, and that is that.

The train eventually goes away
when Max and his mouth go home for the day.
The peace that comes when that occurs,
makes ears grin broadly, mine and yours.

Copyright © 2002 Ted Scheu. From the book I Invited a Dragon to Dinner. Philomel Books. Reprinted by permission of the author.

This was the very first poem that I had published. I read about a publisher (Philomel) in New York that was looking for unpublished children’s poets. So, I submitted three poems and was I ever thrilled when they picked this one for the book. It’s about a kid who I had in my class who had a really, really loud voice. I asked myself ‘what did that kid, Max, sound like?’ and this was the image that popped into my head—a roaring train.