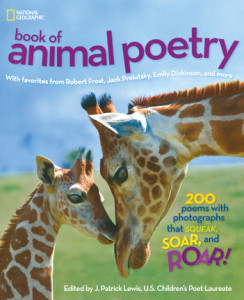 One valve, two valve,
Mollusk, mussel,
Shells itself from
Hustle, bustle.
Keeping still is
No impediment.
Buried under
Muddy sediment.

But when it tires
Of life’s low lull,
It hitches to
A tanker’s hull
And rides the trade routes
While it can
From Kowloon Bay
North to Japan.

The electric charge of any good poem is a matter of friction: the physical force resisting the relative motion of stanzas, lines, sentences, phrases, syllables, consonants, vowels, and other material elements sliding against each other. Children feel this charge whether or not they grasp every nuance of a poem’s ideas.

Some of the most finely charged poems in existence can be found in the anonymous trove of Mother Goose Rhymes. For my poem about the noble mussel for J. Patrick Lewis’s excellent animal anthology, I tried to emulate the force and motion of Mother Goose while using modern vocabulary and imagery.