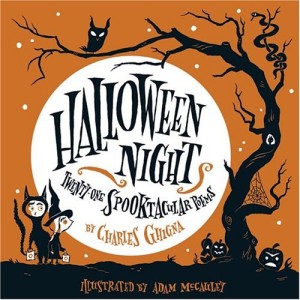 The haunted house is such a scream
Because tonight is Halloween.

The creaking door is open wide
And so we slowly peek inside.

We tiptoe in and hold our breath
(Because we’re really scared to death.)

Two mummies greet us at the door
(Or maybe three, or was it four.)

They lead us to the living room
Through smoky clouds of dewy doom,

Then down a hall where spiders spin
Giant webs to catch us in.

Lost among the mournful maze
We wander through this haunted haze.

We climb some stairs into a place
Where eyes float by without a face.

And then a witch with eyes aglow
Grabs us as we start to go.

She holds us back and with a shout,
“I’ve got you now, there’s no way out!”

We hear our hearts pound in our ears
While fighting back a flood of tears.

We break away and then we hide
And wish that we had stayed outside.

Then suddenly across the floor
A flash of light leads to a door.

A pumpkin shines its candlelight
And points the way back to the night.

Then once outside we start to grin–
‘Cause now we want to go back in!

“Halloween Night” was written about taking our son and his friends to visit a local haunted house. 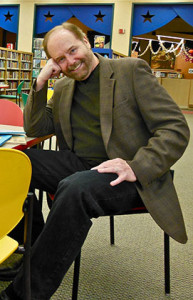